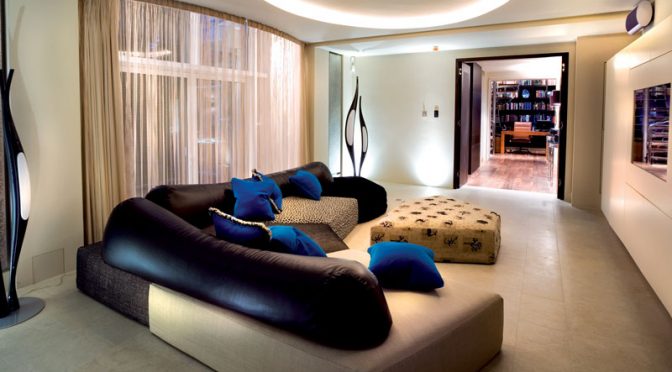 Chelsea is seen by many as the jewel in the crown of south-west London. With its wall-to-wall gastro pubs, world-class restaurants, boutique shops and even its own reality TV series, Chelsea has become a London playground for the wealthy and sometimes famous.Â

But thereâ€™s more to the area than just the iconic Kingâ€™s Road, galleries, celebrity spotting and expensive cars. And itâ€™s easy to see why top, luxury interior designers particularly are drawn to this creative part of the capital.

Itâ€™s hard to believe that Chelsea was once just a tiny Saxon village, located very much on the outskirts of London. The area didnâ€™t change much until the 16th and 17th centuries when it started to become a fashionable place to live for the wealthy, in part due to its diversity of architecture.

In 1673, Chelsea Physic Garden was built for apothecaries and today itâ€™s a stunning botanical space with a rich history and still houses more than 5,000 plant species. A few years later, The Royal Hospital Chelsea was built for retired army veterans. Designed by Sir Christopher Wren, of St Paulâ€™s Cathedral fame, the building still offers a home to soldiers who can often be seen, resplendent in their scarlet jackets and tricorn hats.

In 1712, the rather well-heeled Sir Hans Sloane, physician to Queen Anne, George I and George II and nature lover, in an attempt to preserve Chelsea as a grazing pasture for cows, bought a significant area of land. This plot is became the site for Sloane Square, which is now home to the department store Peter Jones – more a Mecca for consumers, than a meadow for cattle.

By the 18th century, Chelseaâ€™s population had swelled to a giddy 1,500, but its status was quickly growing in popularity with the rich and royal – Kingâ€™s Road got its name because, at that time, it was a private route connecting London to the royal palace at Hampton Court.

By the 19th century, development in the area started to speed up: gas streetlight was introduced; Chelsea Bridge was built in 1853 and soon after its picturesque neighbour, Albert Bridge. The Chelsea Embankment and Town Hall followed and people were beginning to see the benefits of the areaâ€™s pleasant riverside, creative atmosphere.

Artists and writers were increasingly moving in – the poet Leigh Hunt and artist James McNeill Whistler both lived in the area; writer Elizabeth Gaskell was born in Cheyne Walk; Oscar Wilde moved to Tite Street, and his neighbours at various times would have included George Eliot and Henry James.  Itâ€™s no wonder that interior designers are often sought after for designing beautiful interiors in this London hot spot!

In fact, the area became so popular with artistic types that the corner of Kingâ€™s Road and Church Street became known as The Latin Quarter. Thick with artistsâ€™ rambling studios some linked by courtyards, itâ€™s no surprise that in 1891, the superlative Chelsea Arts Club was founded.  This iconic private memberâ€™s club is a showcase of luxury interior design at its best!

By the 20th century, Chelsea had established itself as â€œthe place to beâ€. The impressive Crosby Hall, the only example of a medieval City merchant house surviving in London, was built in Bishopsgate but dismantled and moved to Cheyne Walk in 1910. Three years later the first Chelsea Flower Show was held.

Following the two World Wars, Chelsea emerged like a phoenix from the ashes. This little quarter of London became the epicentre of change, where its ration-ravaged inhabitants and visitors were emerging to express themselves in any way possible – from fashion to morality. From that moment on, the â€œChelsea setâ€ in all its Mary Quant mini-skirt glory was born.

A decade later, the swinging 60s put Chelsea firmly on the map as the heart of fashion and contemporary culture, not just of Britain, but the whole world. The Beatles, Rolling Stones, supermodels, film stars and design icons all rubbed shoulders with each other in a haze of beautiful excess. As long-term Chelsea resident and British film royalty Michael Caine once said: â€œIn the Sixties were under the threat of Krushchev who said it would only take Russia four minutes to blow us all up. So we thought, well, we better enjoy ourselves while we can.â€

Continue the rich history of Chelsea London in our Next Part:
Chelsea: Moving On