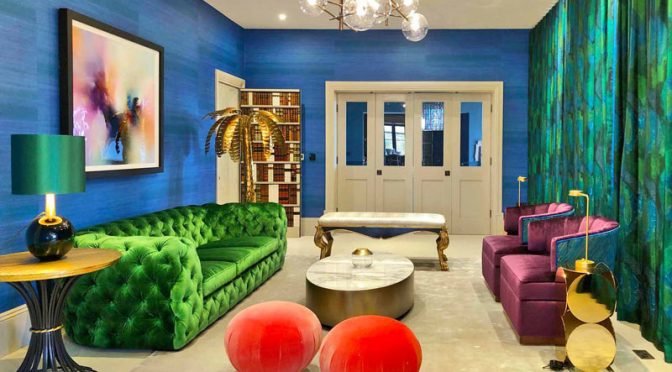 After the heyday of the 1960s, London’s Chelsea saw yet another cultural incarnation, the area in the 1970s becoming a hub for rebellious and unconventional young creatives. This was where Punks and New Romantics  gathered. The latter could be seen hanging out around Sloane Square tube with their Trevor Sorbie “wedge” haircuts, while the former loitered on street benches along King’s Road, sporting Mohicans.

Meanwhile, the Chelsea Drugstore (inspired by Saint Germain’s ‘Le Drugstore’ in Paris) was the pinnacle of cool, selling everything from records to pharmaceuticals. The store ran a ‘flying squad’ motorbike delivery service the riders of which were women in purple catsuits. Today, sadly, the iconic shop is now home to a well-known fast food chain.

By the early 80s, Margaret Thatcher had been elected Prime Minister, the stock market was booming, and “Young and Upwardly Mobile Professionals” dominated the Chelsea scene. Complete with shoulder pads and pearl necklaces, Yuppies usurped the cutting edge art and music scene of King’s Road (and its neighbouring Bohemian BIBA enclave in Kensington). Yet again, the area was witnessing another change.

Today, at one end of the King’s Road is Peter Jones, The Royal Court Theatre, The Saatchi Gallery and Duke of York Square, all offering a feast of contemporary design, culture and retail options. At the other end of this famous street, is another design Mecca. Trot past the famous antiques markets and auction houses of Lots Road and you’ll come to the developed Chelsea Harbour area, and the jewel in its crown, The Chelsea Design Centre.  Here, the incredible collection of interior design shops showcase their wonderful world of eclectic fabrics and textiles, wall coverings, furniture, lighting, floor coverings, tiles, and accessories.  It is a treasure trove for luxury interior designers looking for the latest and hottest trends.

Originally built in in 1987, The Chelsea Design Centre offers arguably the best in interior design and decoration in the country, possibly the world. Its three glass domes, contain 120 showrooms and more than 600 luxury brands – the largest such space in Europe. Everyone from paint manufacturers, fabrics outlets and bespoke furniture designers to the RIBA (Royal Institute of British Architects) bookshop are housed here in this design-rich corner.

Classic contemporary interiors to cutting-edge; minimalism to opulence; urbane sophistication to rural retreat, every floor boasts an array of beautiful fabrics, furniture, lighting, wallcoverings, flooring, accessories and trimmings. All rooms are catered for from kitchens, bathrooms, to outdoor living and many of the design houses also create bespoke pieces for their clients.

Although unrecognisable from its 1960s swinging London roots and punk heyday, Chelsea still retains a strong sense of rich history giving the neighbourhood its deep character and charm with a mixture of bohemian cottages, stucco fronted houses and beautiful garden squares.

To mark the homes and workplaces of famous people who have lived in Chelsea are the Blue Plaques, which were started over 150 years ago across the capital. Politicians, scientists, musicians, sports stars, authors and creatives have all been commemorated, and out of the 933 of such plaques in London, the area with the second largest amount (175 of them) are in Chelsea. Luminaries such as film makers Alfred Hitchcock and Joseph Losey, to political activist Sylvia Pankhurst and writer P L Travers (author of Mary Poppins), all have their names on permanent display.
So, it comes as no surprise that this area, with diverse and rich heritage is one of the reasons top interior designer René Dekker loves living here and working nearby. ‘It’s central, charming and friendly with stunning restaurants and world class design destinations.’