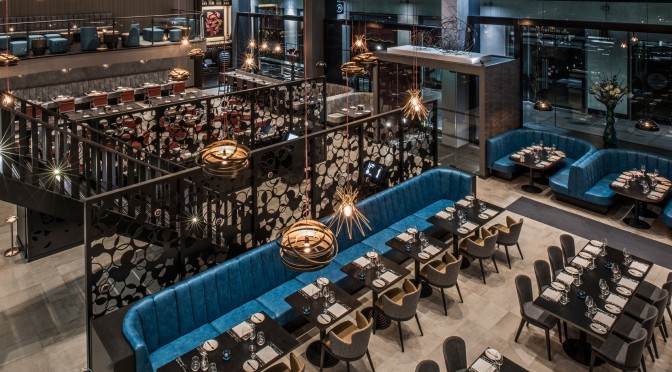 The uber chic interior of London's M, a two-restaurant dining venue nestled in the heart of the capital's Square Mile, boasts luxury interior designer Rene Dekker's latest stunning interior incarnation. The schemes of M Restaurant20 have been specifically created to match the food and mood of each section.

“M Raw” is the casual dining area and specialises in fast and accessible small plates. Signature dishes include scallops and bacon, and black sugar cured salmon. This section also offers a breakfast menu of raw juices, with healthy ways to start the day that include house made granola, coconut quinoa porridge and pancakes. The surroundings for these delicious offerings are equally as tempting with a focus on texture, colour and space. 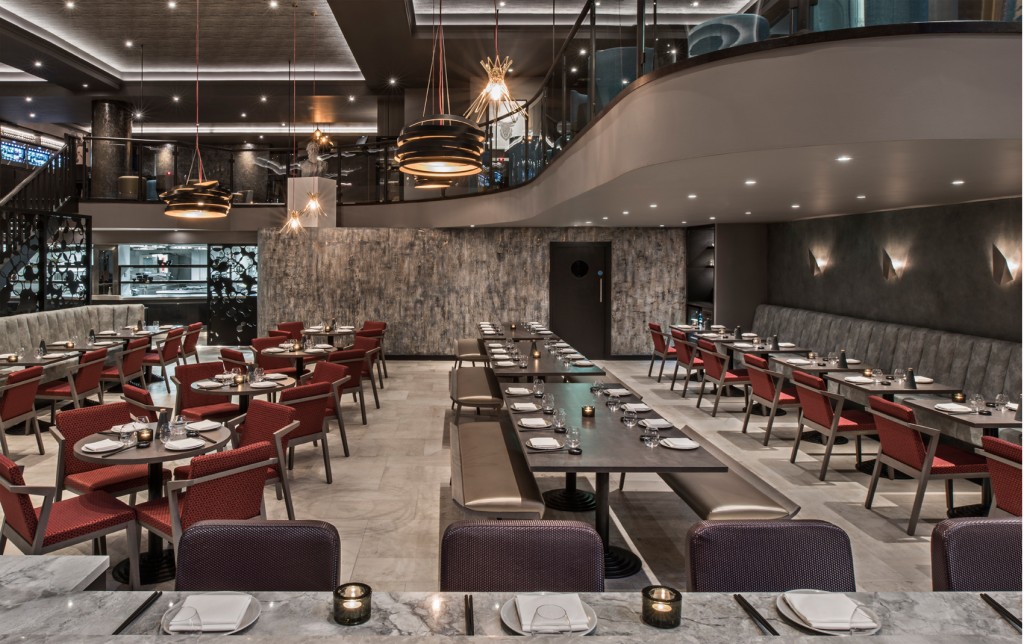 Layers are key to this design. Starting with an intentionally pared back look, parts of the building's structure at M Restaurant have been left exposed. This shows the natural beauty of the architecture as a whole, but also acts as the perfect backdrop to the “raw” theme. The theme is further enhanced by the decorative inclusion of a cow's skull with horns – raw at its most natural.

With    line and shape considered next, particular attention was paid to the use of verticals and horizontals. These appear most prominently in the wall finishes as a slimline brickwork effect. This shape is then cleverly, yet subtly, repeated in long, rectangular dining tables. Above the tables, more lines appear as a series of geometric shapes which are united to create a globe design for the pendant lights – almost skeletal in their construction.

It is this spherical shape that helps soften and create balance to the urban, linear scheme of M Restaurant. The screens dividing specific sections introduce a series of interlinking circles which are an inspired mixture of both solid and clear rounds. This provides an unobtrusive way of dividing the large space while still maintaining a sense of the building's impressive proportions. By being able to see through the floor to ceiling constructions, the divisions introduce privacy, yet not total visual obstruction. The circular theme has then been repeated in details such as the wall mirror, the shape of the dining chairs with their smooth curved backs, and even the solid round water glasses.

The visual balance of this “Raw” section of the restaurant design is further achieved through the attention of detail paid to texture. Gun metal, brushed fabric, glass and even bone combine to achieve a seamless blend of unity. 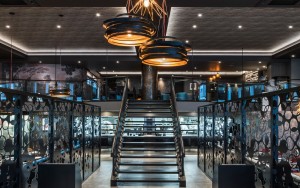 Meanwhile, colour, as ever, plays a vital part. The overall shades in this section are of muted earth tones, ranging from gentle greys at one end of the palette spectrum to rugged hues of burnt umber. In between, there are touches of dusky coral, as seen in the upholstery of the chairs. Brighter splashes of this tone are evident in the ruby glass votives. They are made all the more vibrant by warming candlelight and, if you look closely, you can pick out the circular, blood red, “M” monogram. These are perfectly placed at intervals among the spheres in the dividing screens, while allowing a glimpse through the screens to the electric blue of the Grill section of the restaurant. Crisp white has been used to punctuate and lift the scheme, but only in the details such as the crockery and napkins for an element of freshness.

René Dekker  has created luxury interior that is multi-faceted and layered, creating visual interest at every corner and turn. Nineteenth century artist, philosopher, political theorist and design guru, William Morris was famous for his quote, “to include nothing that you do not know to be useful, or believe to be beautiful.”   Dekker has done exactly that in this stunning, beautifully chic urban scheme that is M Restaurant.