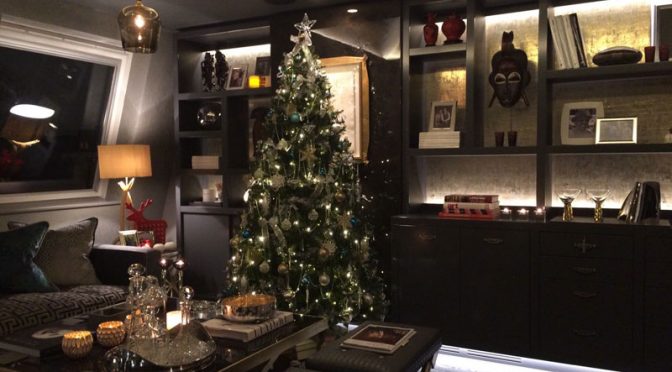 Some prefer the ease of a fake tree, but there’s nothing quite like a real Christmas tree. The smell, the look, the time spent foraging around for the perfect specimen. But there are things to think about when choosing one – watering, needle drop, size, colour, scent and in this day and age, sustainability and ecological considerations. A luxury interior designer will be able to advise on the best types of tree and how to decorate it to create a stunning centre piece for any room or entrance hall.

The main three different types are Fir, Spruce and Pine and within each category, there are specific varieties. Within the Fir family, there is the Nordmann, Balsam, Douglas, White, Noble, Canaan and Fraser. Pines include Scots, Eastern White and Lodgepole. Finally, for Spruce, there is Norway, Serbian and Blue. Each one has its own pros and cons, but a top interior designer will know exactly which one to choose to showcase beautiful Christmas decorations and to create a beautifully festive focal point.

The Nordmann fir is one of the most popular Christmas trees in the UK. This is mainly due to the fact that the trees have a reliably symmetrical shape with sturdy branches, providing the ideal pattern and strength on which to display treasured decorations. They also have a wide base and dark green, broad needles which, along with other types, are classed as ‘non-drop’. In fact, they are known to drop much later than other varietals, which make them a good low maintenance option. Plus, because the needles are soft and glossy, they are considered child-friendly.

If what you want most is that distinctive Christmas tree smell when you enter a room, the type of tree that is apparently the most fragrant is the Balsam Fir. The only issue with this variety is that they need to be watered regularly to keep them from drying out and to sustain the aroma.  But it’s worth the effort if you want the smell of Christmas and a beautiful tree to compliment your interior scheme for the holidays.

Canaan Firs are often described as being very similar to the Balsam Fir, but with the added needle retention of the Fraser Fir. For those who like to go all-out with decorations, the latter has stiff branches that can withstand the weight of ornaments, and also has a pleasing scent and holds its needles well.

Douglas Firs are popular because of their perfect pyramid shape, good needle retention and a lovely citrus fragrance. The variety boasts soft, dark green or blue-green needles and, because the branches radiate needles in all directions, they tend to be nice and full. It's a statement tree and they can grow extremely large.

The Noble fir is native to the forests of Washington and Oregon and was introduced into Britain in 1830. They're hard to find in the UK and more expensive, but their lack of needle drop makes them a popular choice. Also called the Concolor Fir, the White Fir is known for its blue-tinged needles, and boasts a scent that smells more like citrus than pine.

The Scots Pine (or Scotch Pine) is known for its dark blue-green foliage, and lovely scent. It also doesn't dry out or easily shed its needles, which are sharp. In addition, the branches are known for being strong if you're planning on lots of decorations.

Two popular varieties in the United States are the Eastern White Pine and Lodgepole. The former are the perfect choice for a natural look and if you want the tree to be the focus of attention. The downside is that they have little aroma and because the leaves are soft and flexible, they’re not ideal for heavier decorations or ornaments.

Meanwhile, the Lodgepole pine has such straight stems they were supposedly once used by Native Americans as the central pole for their wigwams. It's a bushy tree with yellowy-green needles and is very good for needle retention.

The bright green, bushy Norway Spruce has a rich pine scent and is a good budget option. The downside is that it also has spiky needles so it's not very child friendly and requires maintenance. This means watering it a lot while it’s indoors, and having to vacuum up the needles for possibly the rest of the year!

The Serbian Spruce is similar to the Norway spruce, but with slightly better needle retention. These trees have an attractive blue underside to the needles as well as a slender shape making them suited to smaller homes or corridors. They're increasingly popular in central Europe and look fabulous with simpler decorations or just a simple string of pretty lights. It’s probably best to buy this type of tree in mid-late December to reduce the amount of needle drop over the festive season.

Despite being at its bluest in spring, the long needles of the Blue Spruce tree have a lovely silvery tinge during the Christmas period. Much like its Norwegian counterpart, the needles on this variety are sharp, which possibly makes it not the best choice with children around. On the plus side, the needles don’t drop as quickly and generally the trees boast a good symmetrical form.

Finally, with needles that point straight upward, Eastern Red Cedars are particularly dense and green. Despite its name, it's not actually a cedar tree, it's really a part of the juniper family.

Whatever Christmas tree you go for, if you choose the right one and care for it properly, it can last for around a month and help make the festive season one to remember.  And not to mention, add further delight to your interior! The actress Sandra Locke once said: “I am a romantic. I want to cry when I throw out my Christmas tree, and have a lot of feelings about magic and fantasy.”