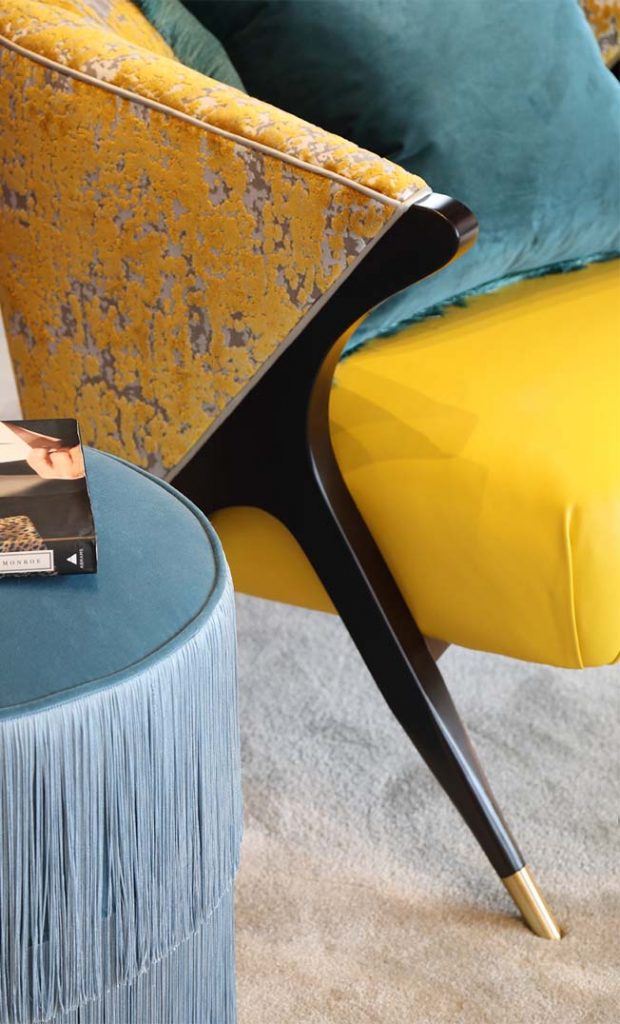 Top London Interior designer, René Dekker was thrilled when we were chosen by the client for this magical project. This high end interior project was a dream come true and René poured two years of passion into providing an award winning project.

The house has a spectacular triple volume Entrance Hall with a large lantern skylight, bathing the internal ‘courtyard’ in oodles of daylight. Hanging the full 9m drop is an organic looking chandelier in silver and gold in the form of a magical tree which the team at René Dekker Design brought in from Cape Town. It was important that the ‘light sculpture’ was visually exciting from all floors after all and not just from below as it is seen from all the landings and stairs, the details is what creates luxury décor. As the walls in this space go from the ground all the way to the top floor, it was key when choosing the wall covering to achieve both a neutral palette with interesting texture. Strong colour or pattern would have been overwhelming. The perfect paper was found in the form of a pleated linen in a neutral shade, which would give the space a warm and inviting feel to it. The scheme was completed with a gorgeous hall table and a consul.

There were only a few rooms where the client had given the top London Interior Designers any tear sheets and the Dining room design was one of them. He was looking for a dark (black) dramatic space where he could entertain his guests and we did not disappoint. We first designed the wall panelling in a traditional style of recessed fielded panels and then added an exotic paper, in black and gold, into the panel. To update the styling the joiner finished the panels in an extreme matt finish. The floor here was again a traditional basket weave parquet but with a modern grey tone to it with silver block inserts and we completed the high end look with a silver pearlised paper on the ceiling. Colour came in the form of purple and gold in fabrics which we used in the window treatment and upholstery.

The client also gave us a tear sheet of a panelled room at Aynhoe Park which he wanted to emulate in the Study to give it that stunning interior décor. Here again we recreated traditional panelling using a combination of polished fiddleback sycamore in the frame and panels and rough oak for the details (to match the floor). To complement the ‘collectors’ study look and to add to the exotic feel, we used flocked leopard wall paper in the bookshelf, a geometric pattern wall paper on the ceiling and ordered a fabulous textile-dermy trophy lion from the very talented Carola Van Dyke. Bespoke furniture here included a leather wrapped desk with brass detailing, and meeting table and chairs from The Sofa & Chair co.

The Living room scheme was all about neutrals and pattern, yet the décor still had to exude luxury, so here the client gave René a free hand in the interior design. Shades of champagne and mushroom are mixed with ivory and charcoal and plaid, check, stripe and Greek key are all in the mix. A specially designed curved sofa was made to avoid creating a stiff or formal layout here. Made up in 4 different fabrics, it is literally strewn with sumptuous scatter cushions in all sizes. At the book case we placed a beautifully tailored arm chair in dramatic off white and charcoal fabrics and the two main arm chairs at the fire place both swivel. Other items include a serpentine design consul and occasional table with shagreen inlay, the ubiquitous A Modern Grand Tour standard lamp and a bespoke wool and silk rug and the walls were hung in a cream and gold pattern vinyl. We wanted the guest WC to be dark and sexy with WOW factor, a retreat from the colourful schemes in the rest of the house. The space is resplendent in black and gold, with wall paper and brassware and mirror all following the theme.

The rear section of the house had a much more contemporary feel to it, higher ceilings with no cornicing and large glass windows and sliding doors overlooking the best views in England; rolling Cotswold hills and dales! In fact the only thread from the rest of the house was the raised and fielded panelled doors we designed. The client was very clear about the function of this area as it was the main hub of the house and linked it with the garden and the pool. Here he wanted colour and pattern in abundance and top London interior designers, Rene Dekker did not disappoint. The feature wall in the Snug, a flamingo pattern in greens, pinks and blues, set the tone for the entire space. A large banquette was made using a combination of teal velvet and linen upholstery and this was complemented by a bespoke joinery unit using a mixture of vellum and plain colour lacquer. We added some funky foot stools in citron and sky and we also used two further deep buttoned ottomans in apple and candyfloss velvet. The whole affair was completed with a pile of luxe scatter cushions in all the colours of the rainbow.

Separating the Snug from the Dining space the team at René Dekker Design created a two panel sliding screen, providing some privacy when required without interrupting the flow. The informal dining space includes a large 12 seat dining table and multi-coloured dining chairs. In order to retain the view when entering the room, we needed a chandelier that would at once allow you to see beyond into the countryside as well as provide a fun and captivating luminaire. This came in the form of the Bollé from Giopatto and Coombes, a ‘bubbly’ arrangement suspended from rose gold tubes (to match the rose gold base of the table). Finally René Dekker provided the design intent for the kitchen, using a combination of Confusion marble and doors made up from several components including a premade ripple board, fiddleback sycamore, dark stained walnut veneer in a chevron design and rose gold detailing.

The lower ground floor was to be a dedicated entertainment space and needed to have a completely different feel to the rest of the house. The high end London interior designers toyed with several options and finally settled on a scheme that would combine the characteristics of a disused underground station and a NY city loft. Access to the floor is via a ‘back stair case’ where the walls are hung in a luxury faux concrete wall covering and the spindles were made from Rebar with a distressed leather handrail. We included an LED Cinema sign and found some fabulous industrial lights to suspend down the middle. To add authenticity we filled the bookshelf at the bottom of the stairs with old records, cassette tapes and videos as well as Cine 8 film reels and projector. Just off the lobby is the guest WC where we used a combination of peacock blue mosaic and gold glitter grout with brutalist sanitary ware from a manufacturer in the Czech Republic which supplies prisons!

Through the luxe leather panelled double doors, you enter the most amazing underground area. To achieve the grungy loft look René Dekker Design applied a grey cement style polished plaster to the walls to get a concrete effect and the floors were laid in a heavily distressed dark oak. In the bar area we vaulted the ceiling and added brick tiles to give that authentic look.

Split into several spaces the main room is made up of a relaxation space with a giant serpentine sofa, loads of luxurious cushions and little cocktail tables and old fashioned arcade games. We also included some gold mesh curtains (gold being my favourite colour). The bar area has wall to wall and floor to ceiling joinery, stocked up with glasses and drinks for when you have your favourite 100 friends around for a party. Here we also included a small round bar which doubles up as a DJ booth and pendants. The piece de resistance is the bespoke feature light above the joinery. Just off the Games area is the main wine storage room. To give this room a bit more of a cosy feeling we installed reclaimed leather tiles on the floor and applied a gilded cork wall covering to the walls and we used a heavily distressed and lime washed oak to create the joinery.

The jewel in the crown is the Cinema. A symphony of reds, this would be anyone’s dream project! The client loved the cinema at the Soho Farm House and wanted something similar. Our first job was to design the architecture of the space which included adding recessed arches to the walls and back lit columns all which would define the space. The floor was laid in a rich silk effect red carpet and we ordered several large double sofas and wing chairs in velvet and leather. Walls were hung in faux effect vinyl and the recesses were clad in a padded gaufraged velvet.

The master suite had to be enchanting yet striking so we opted for a colour scheme of cream, mint, soft pink, gold and lavender and tried to incorporate as many luxurious finishes as possible. The ceiling is covered in a gold fabric, the walls were applied with pearlised paint and the feature headboard is hung in a print called the Secret Garden. On the entrance side the wall is hung in a grass cloth herringbone covering. There is a rise and fall TV ottoman in pink and gold leopard fabric, we used ostrich feather shades on the clients existing lamps and an agate inspired pendant.

The en suite is an extension of this ethereal space, incorporating bold elements such as the purple onyx and gold bath, gold leaf wall covering on the ceiling as well as the 2.3m light sculpture. Here we repeated the use of the pearlised paint which we accented with faux travertine and the floor was laid with a specially commissioned mosaic tile design.

Guest suite 1 was a colour based scheme. The ‘feather’ design wall covering was the first sample we found, on which the entire scheme was based. Added to this he included seafoam and peach with hints of rose gold.

Guest suite 2 was loosely based on a Japanese theme. Here we just had to use geisha design wall paper. Not to overwhelm, we hung the rest of the walls in a random organic pattern wall covering in teal and created a Shoji Screen sliding door set for the wardrobes with fabric.

The scheme in Guest suite 3 is a modern take on an African theme. Here we used a dark faux ostrich skin wall covering on the headboard wall with a light dot pattern wall covering on the other walls. There is a feature pendant in gold and black and we created a specially design headboard using several fabrics and trims and procured two reeded bedside tables to complete the scheme. 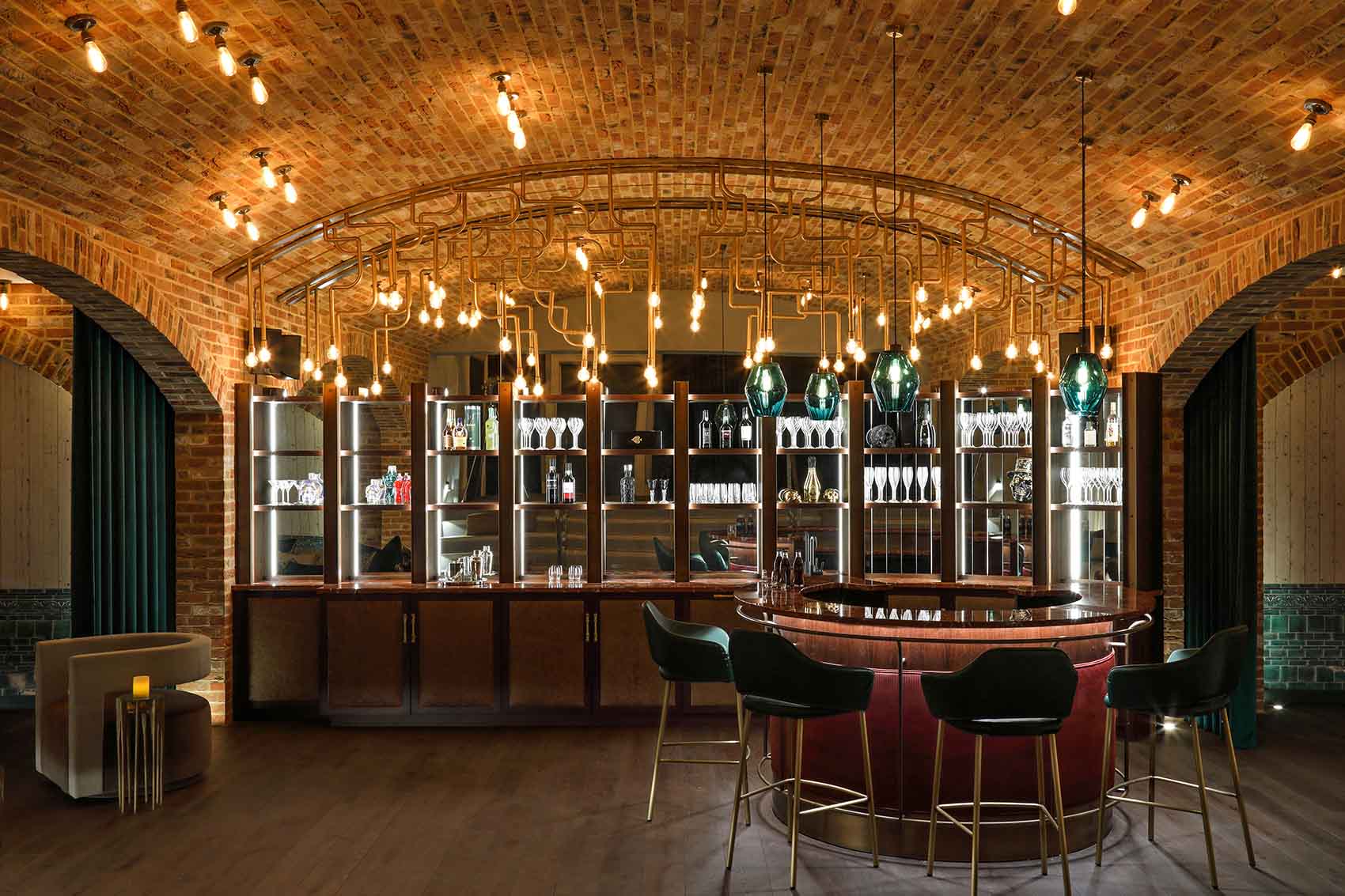 A view from the Dining Room out to the Entrance Hall. In the foreground the Kifu Chital hall table in brass and Shagreen, a peacock blue velvet armchair and beyond to the bespoke solid marble staircase 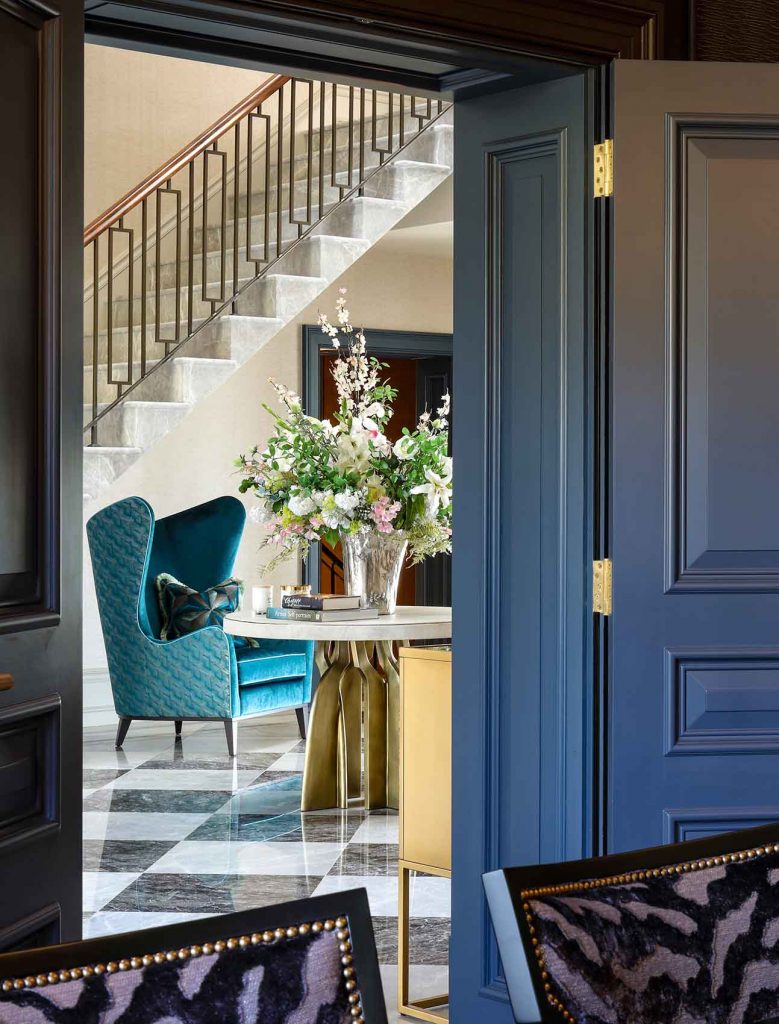 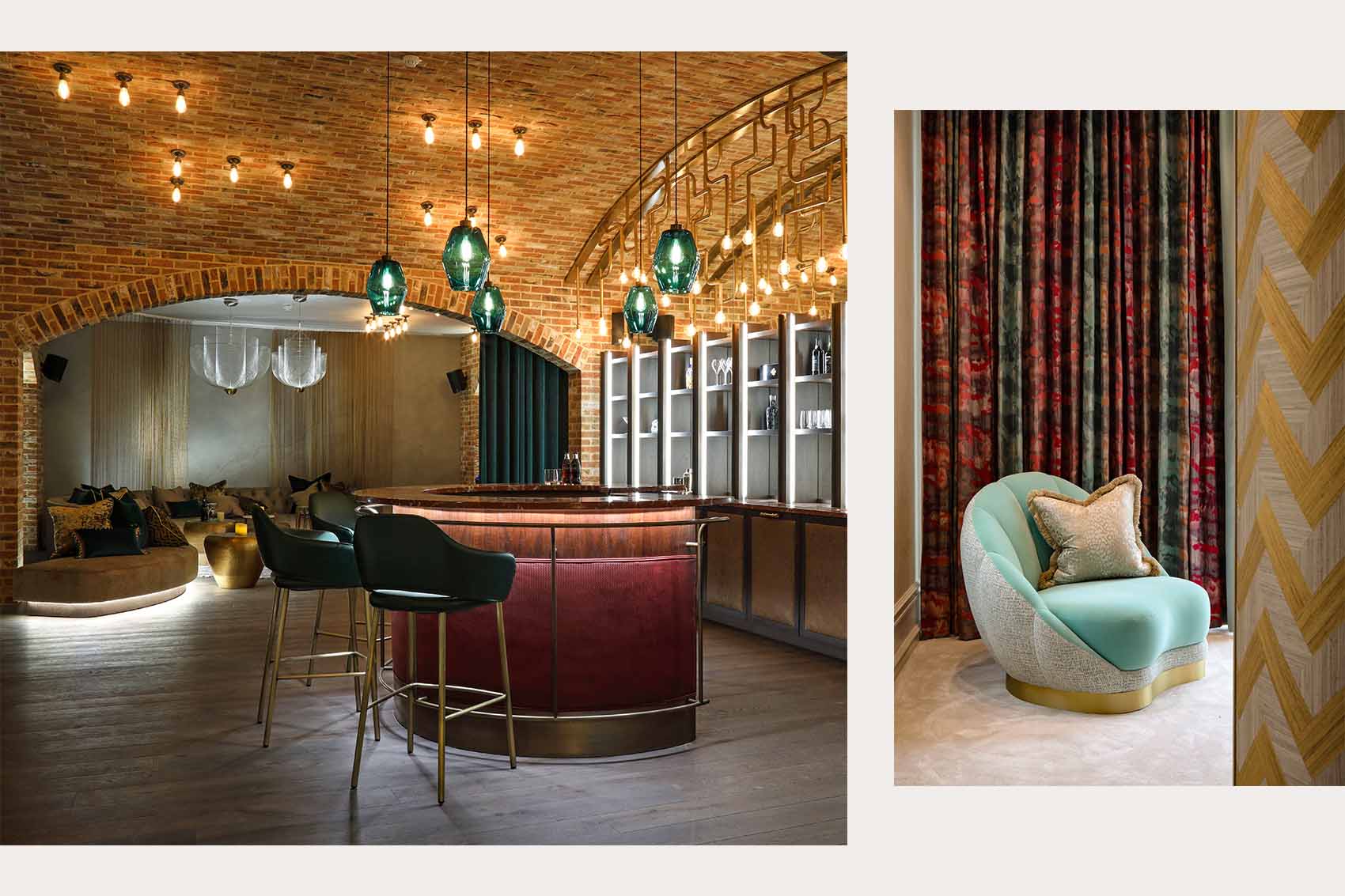 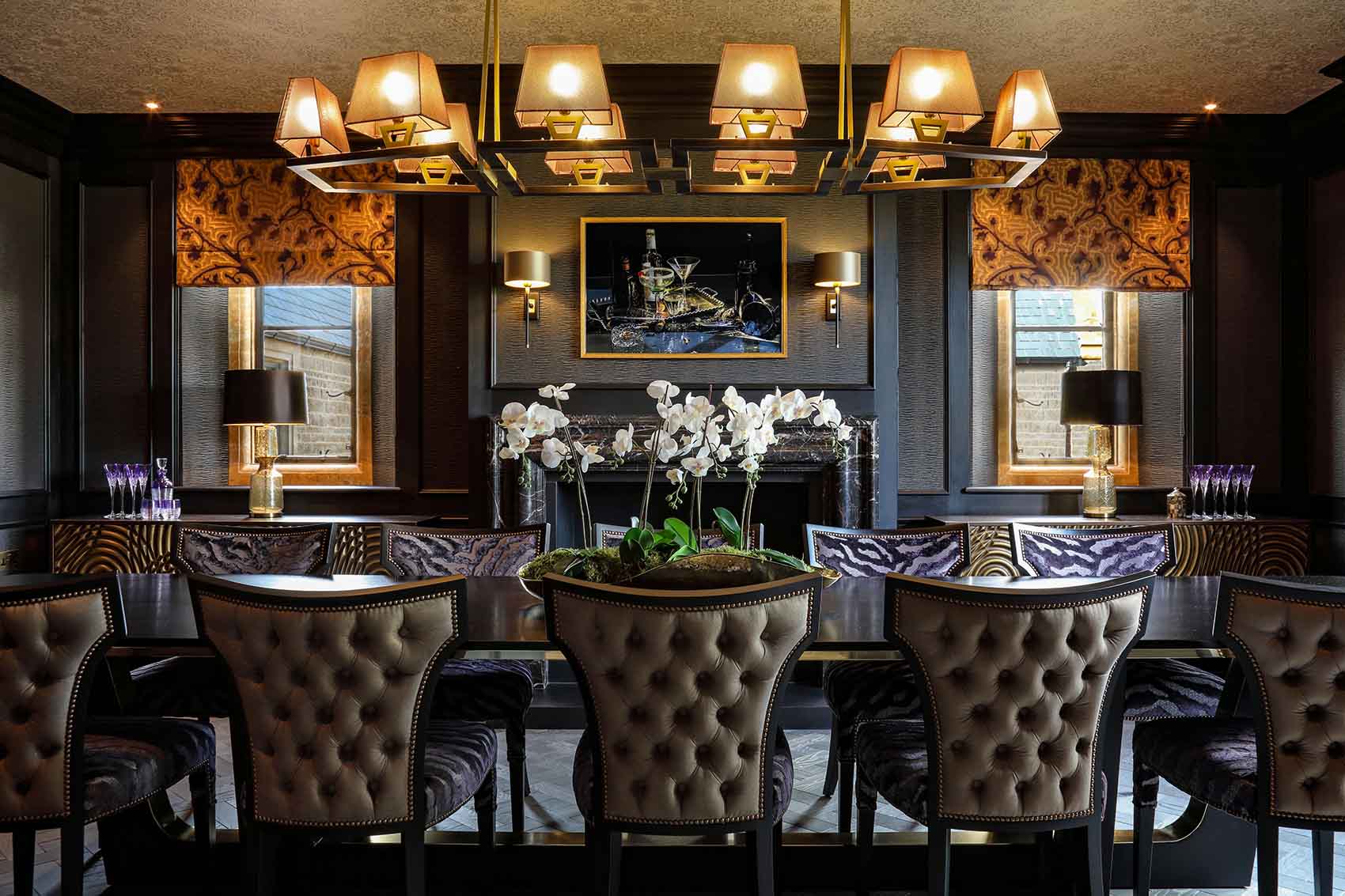 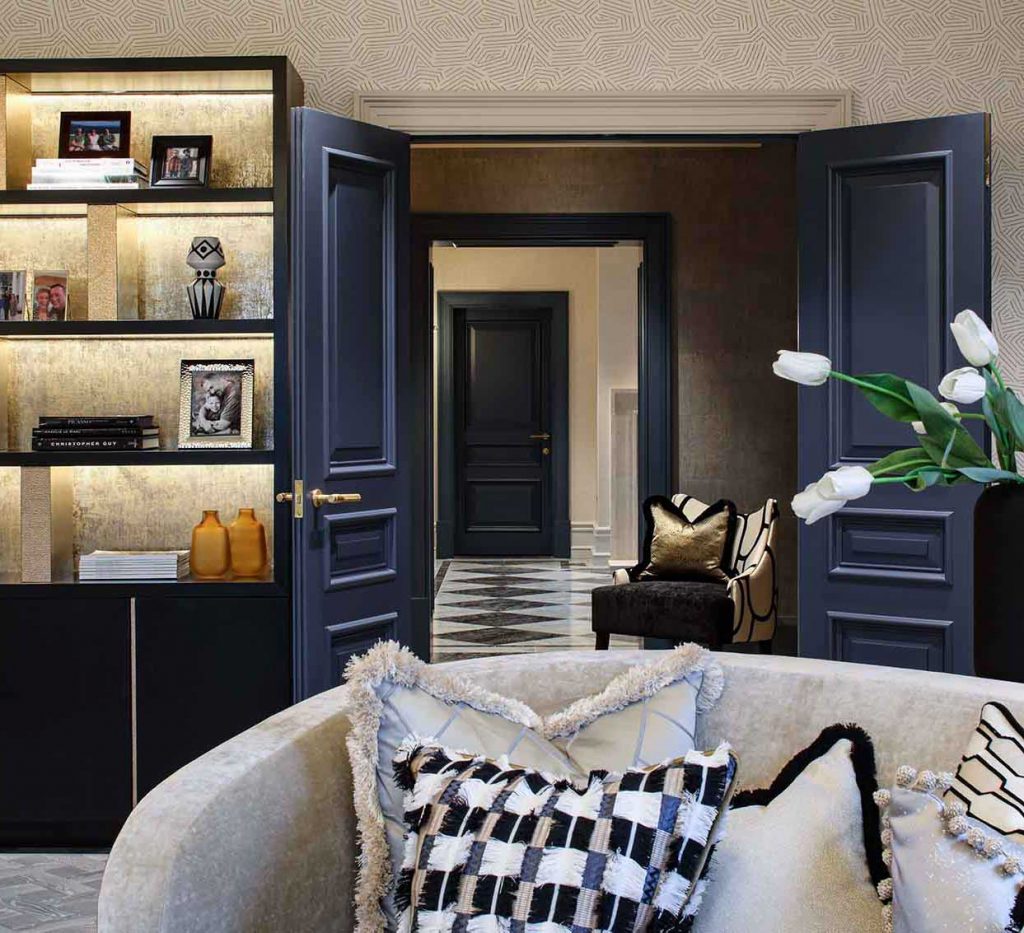 Room with a View
Contrasting pattern and texture resplendent in the accessory fabrics, echoing the patterns and colour scheme beyond 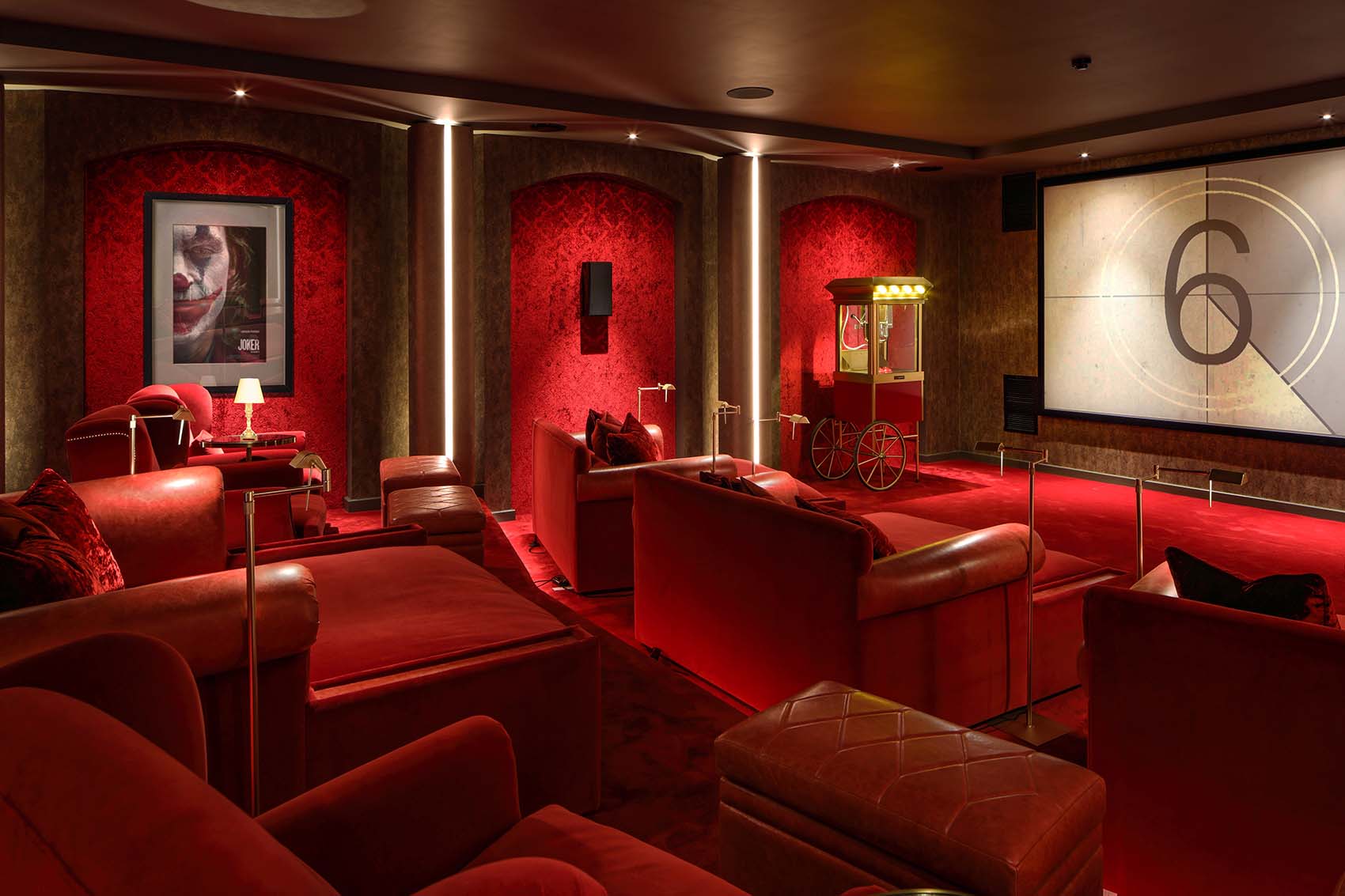