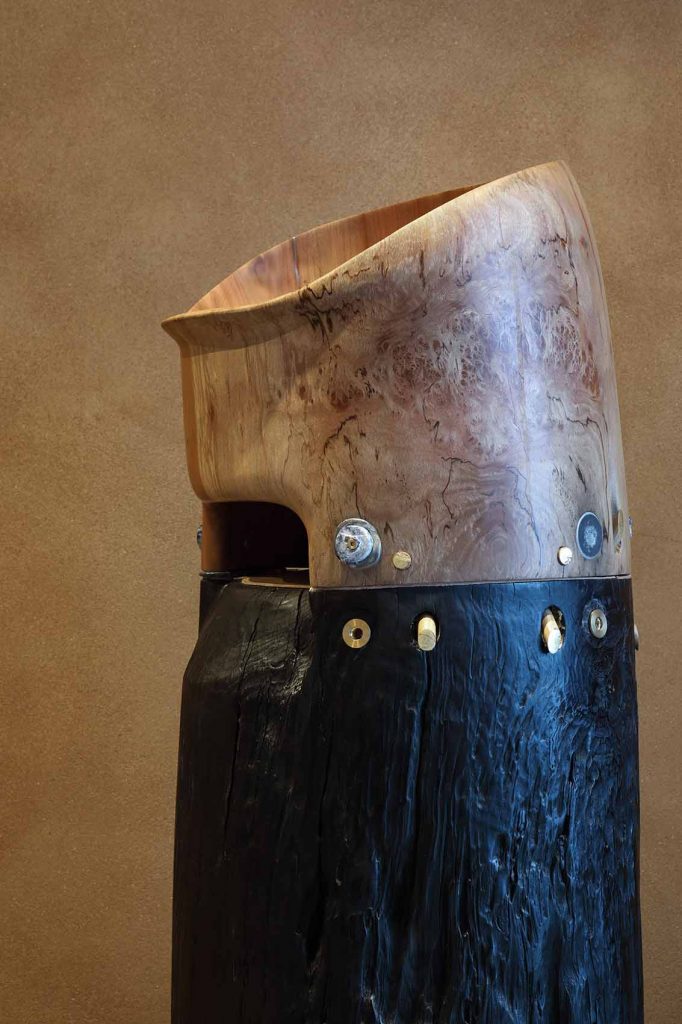 ‘The Agony & the Ecstasy’ pretty much sums up the journey that the client took when he decided to fulfil his lifelong dream of opening a restaurant.

21 Berners Street was an existing eatery location, previously occupied by Il Sud Restaurant. It comprised of a front of house space of approx. 828 square feet and back of house kitchen, staff area and public wash room facility of approx. 1 216 square feet. The scope of works included a full stripping out to the front of house, new partition walls, some cosmetic refurbishments including new decorations and sanitary ware to all WC’s, new floor and ceiling, new joinery and new small power, AV and lighting layout. The back of house received a brand new kitchen with all new appliances.

RDD was given the brief to act as the lead consultant and interior designer on this project which included the design development for the interior fit out as well as the FF&E.

Under the interior design aspect RDD would provide a ‘Design Intent’ package as well as some construction drawings, accurately outlining the final design, which would be used by the main contractor to carry out the fit-out of the restaurant. Although not fully developed at the start of the project, the brief for the design was to provide an interior that had both refined European detailing as well as traditional West African styling, creating a fusion that would appeal to a sophisticated audience.

Within this brief, RDD would explore and conceptualise the floors, walls and ceilings, design and developed the main space and the WC’s, as well as choose colours and finishes. RDD would also suggest and specify the ironmongery and the fixtures and fittings (sanitary ware and lighting).

The client, Aji, had been a patron of M Restaurant in Victoria (which was another of RDD’s designs) and was so inspired with the combination of finishes, that he hired the studio to help him realise his passion to open Akoko.

He had a strong and focused idea of what he was expecting to achieve and already had artworks and sculptures which needed to be integrated into the scheme. So under the FF&E aspect of this project RDD selected and specified the furniture and fabrics as well as the decorative lighting.

The initial meetings began in the Spring of 2019, when the first premises had already been identified in East Castle Street London W1 but that fell though the net and it was a few more months before the Berners Street location was agreed.

The client’s first plan was to keep the existing kitchen and carry out only some cosmetic alterations, with the bulk of the design process focusing on furniture and finishes but it soon became clear that there were some serious shortcomings in the kitchen which meant a bigger scope of works, for both the designer as well as the main contractor. In the meantime, the landlord wanted to add another floor to the building which meant installing an RSJ across the full width of the restaurant as well as reclaiming some of the back of house back within his demise so it was agreed that both refurbishments would happen in tandem…and then the pandemic hit! This meant a full closure of the site for several months while the world tried to stave off the catastrophe.

Finally, after several months, the building site reopened and works could finally commence. By this time however the plan had changed again for the third time and there were now only three restrooms instead of 4, the office had disappeared and the kitchen was sizably smaller. This full refurbishment also meant that the clients had to re-apply for the liquor licence, submit a full proposal to the Council as well as carry out a full fire risk assessment. It also meant that the redundant AV, alarm and fire system would need to be replaced and all this at costs that were never included in the original budget. Anyone else might have thrown in the towel out of sheer exasperation but not this client … he remained positive and buoyant throughout the process and a slave to the ultimate vision.

The finishes in this upmarket gastro-adventure clearly define its offering. The walls have been plastered in a rough textured clay, reminiscent of a traditional African hut, the floor and the skirting is a dark grey textured oak and wall coverings used are in a reflective dark copper. The WC’s are also super chic using a combination of the same palette but in different materials. Dark grey geometric tiles, super smooth satin painted doors and solid stone basins and fabulous porcelain coat hooks are the order of the day. Even the signs on the toilet doors were specially designed in a style that compliments the décor.

The final touches include sublime limited edition chairs from the Nguni Collection at de la Cuona, imported from Cape Town. The design is a perfect combination which encapsulates not only the natural forms and shapes of Africa (‘the back rest recalls the horns of African cattle’) but echoes that perfect Danish chair providing authenticity as well as ergonomics! The reception podium is a work by the artist Joel Parkes. Made using a combination of oak and a reclaimed piece of plane tree (cut down on Shepherds Bush green by the council) refashioned into a sexy standalone pedestal, partially fired, worked in with pewter and adorned with Lapis Lazuli, brass and leather (amongst other things).

Finally the main art installation is a piece by Niyi Olagunju simply named Ekpiri #51. A large scale work made from pods of Ekpiri seeds. These seeds are normally strung together and worn as ankle adornments worn by the Igbo.

‘Stringing these seeds together in rows, the artist either paints or gilds them in various precious and semi-precious metal leaves to conceal the earth tones of the objects. Minimalist invocations of dynamic subjects, the works in this series demonstrate Olagunju’s interest in reconfiguring historicized matter. Reminiscent of the aesthetics of El Anatsui, these works are more organic and are rooted in traditional dance and music, hence the waved installation’.–Courtesy of the artist

As with the design consideration, the cuisine is also an inspiring choice of West African cooking that has been deconstructed and then presented as edible works of art. Courses is served on organic timber and clay tableware specially commissioned for the restaurant.

While the journey was long and at times quite frustrating for the client, the result is a perfect blend of passion and design, restraint and luxury, texture and art, client and designer. 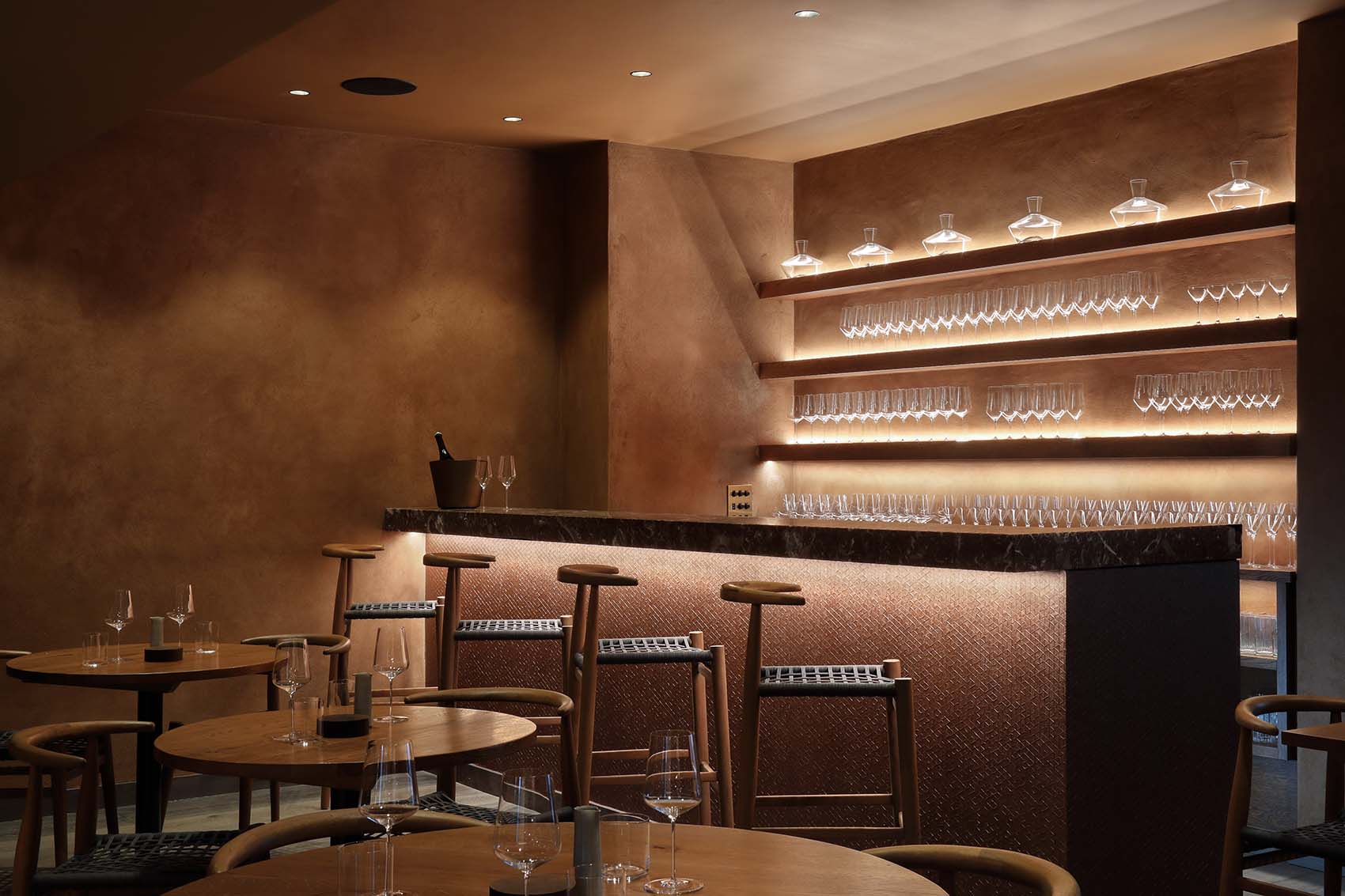 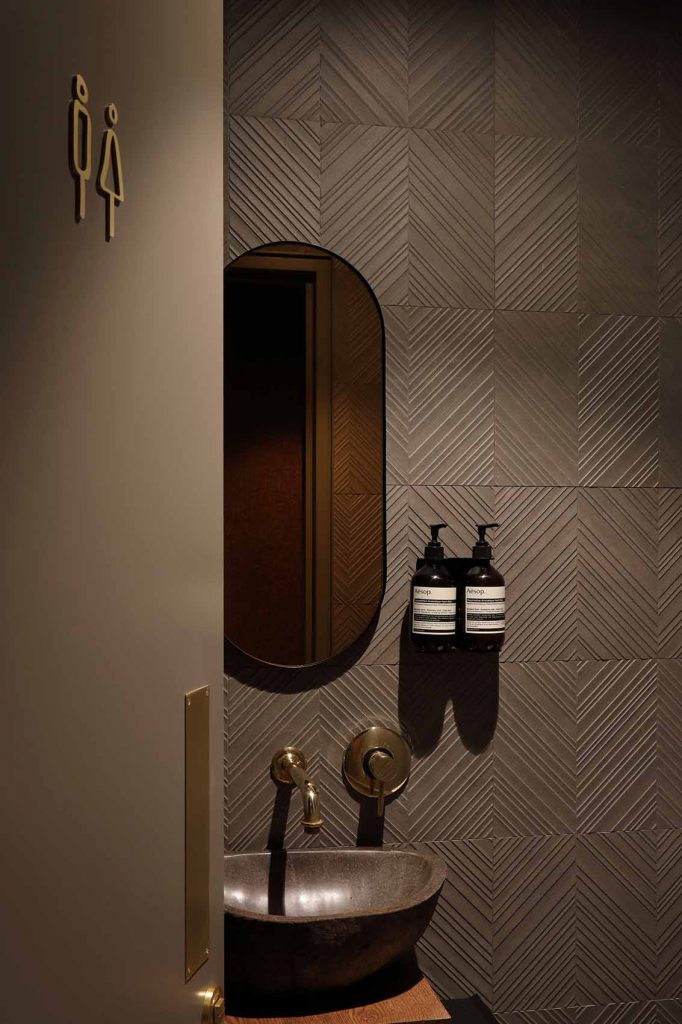 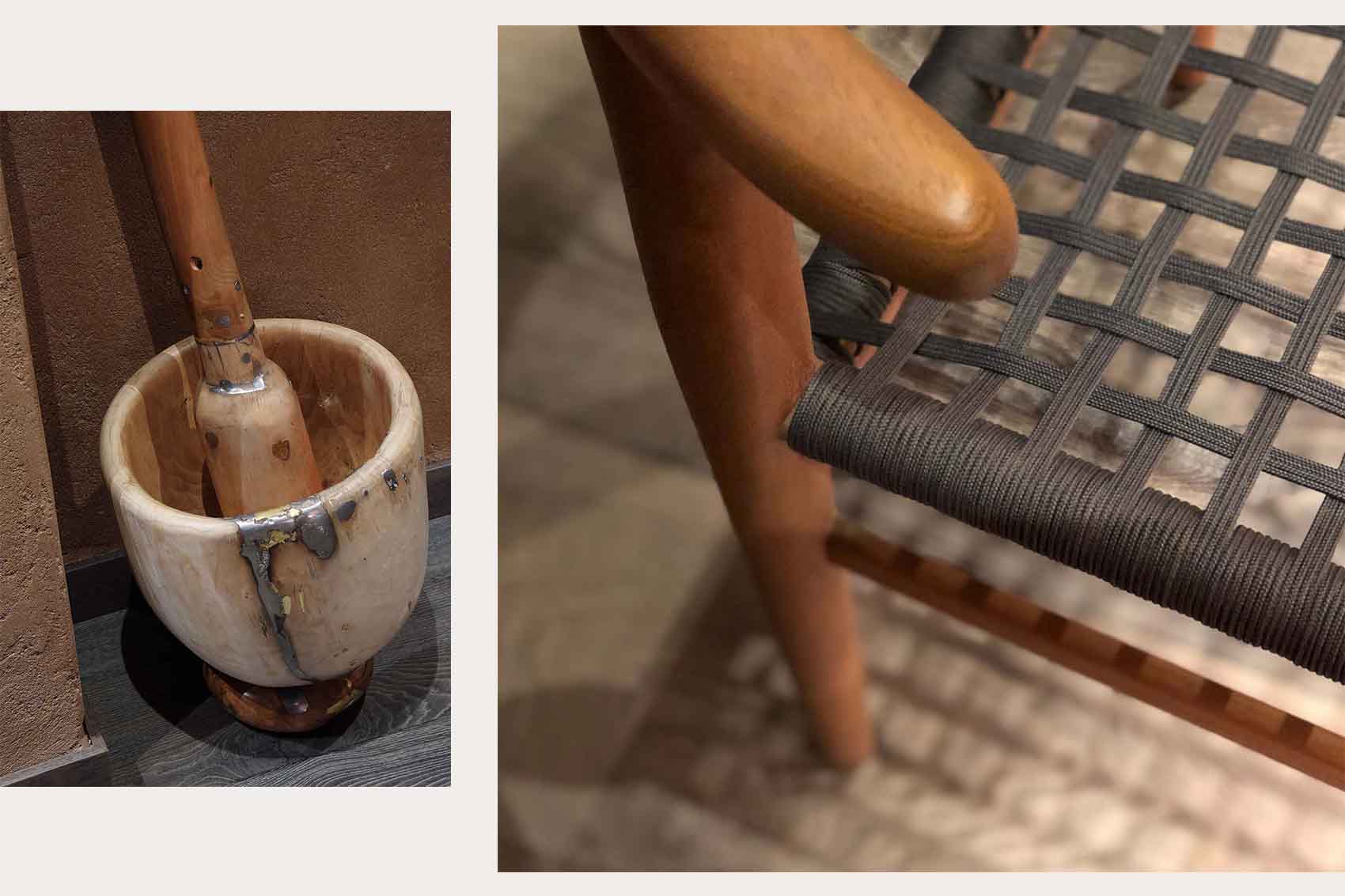 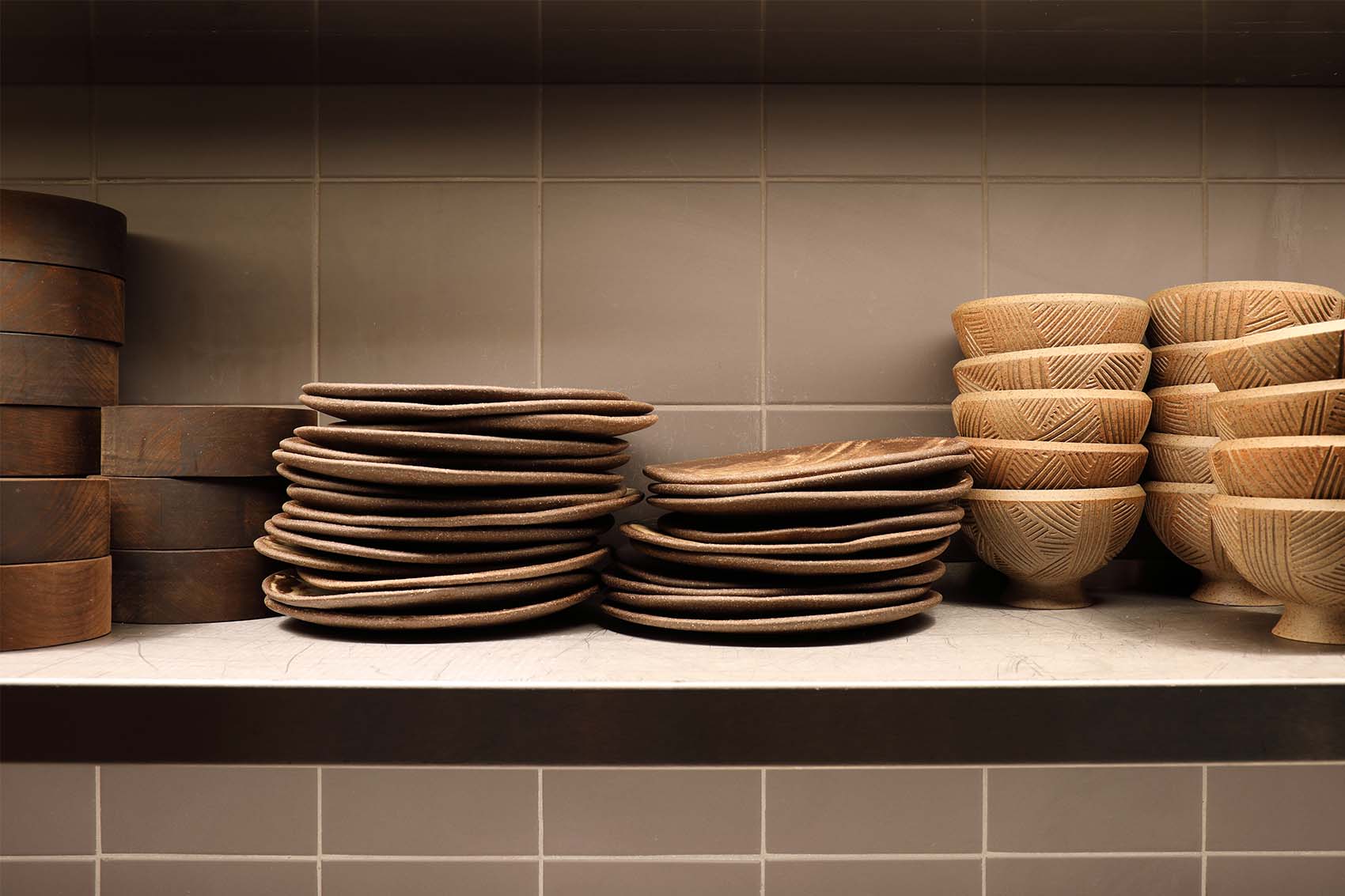 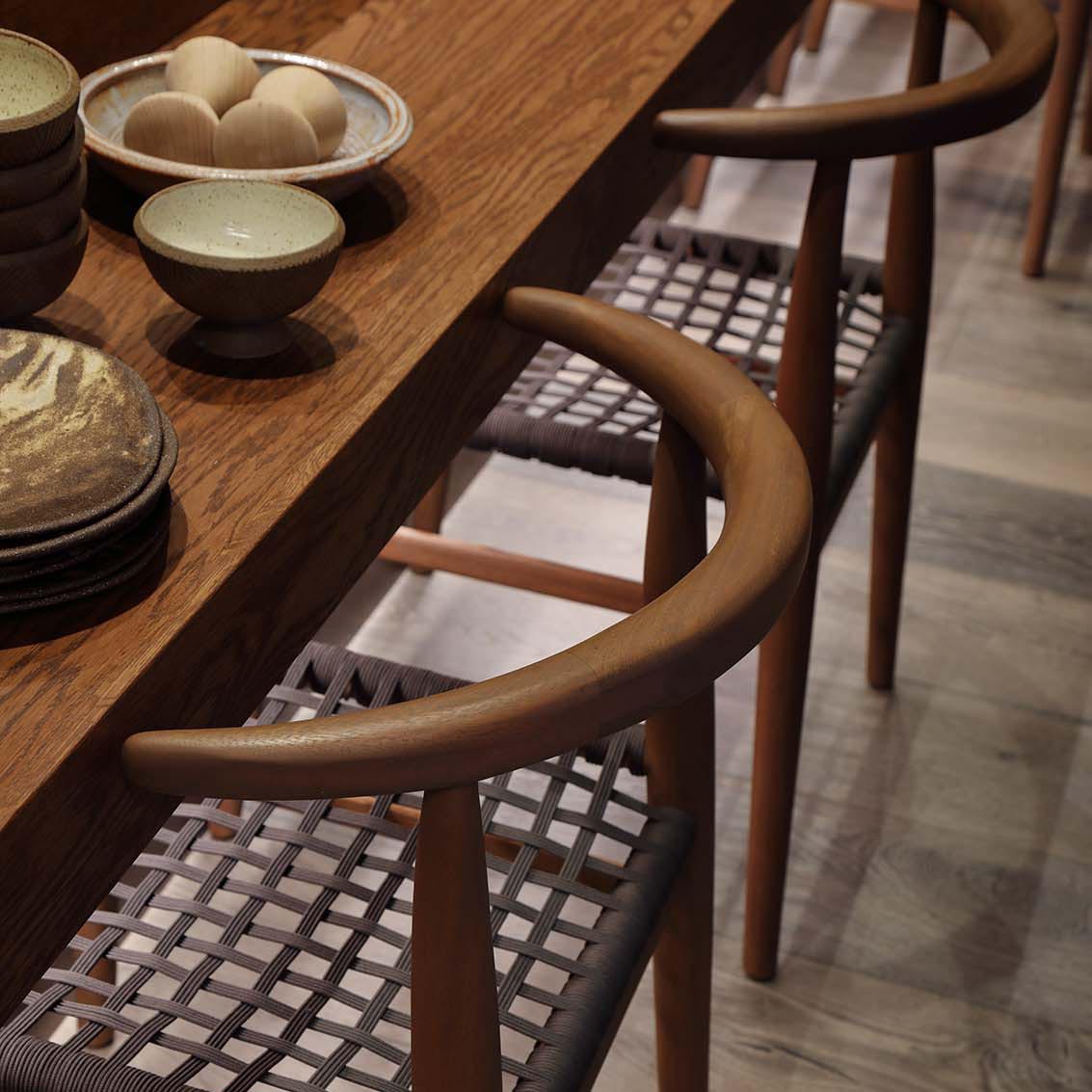 The design is a perfect combination which encapsulates not only the natural forms and shapes of Africa (‘the back rest recalls the horns of African cattle’) but echoes that perfect Danish chair providing authenticity as well as ergonomics! 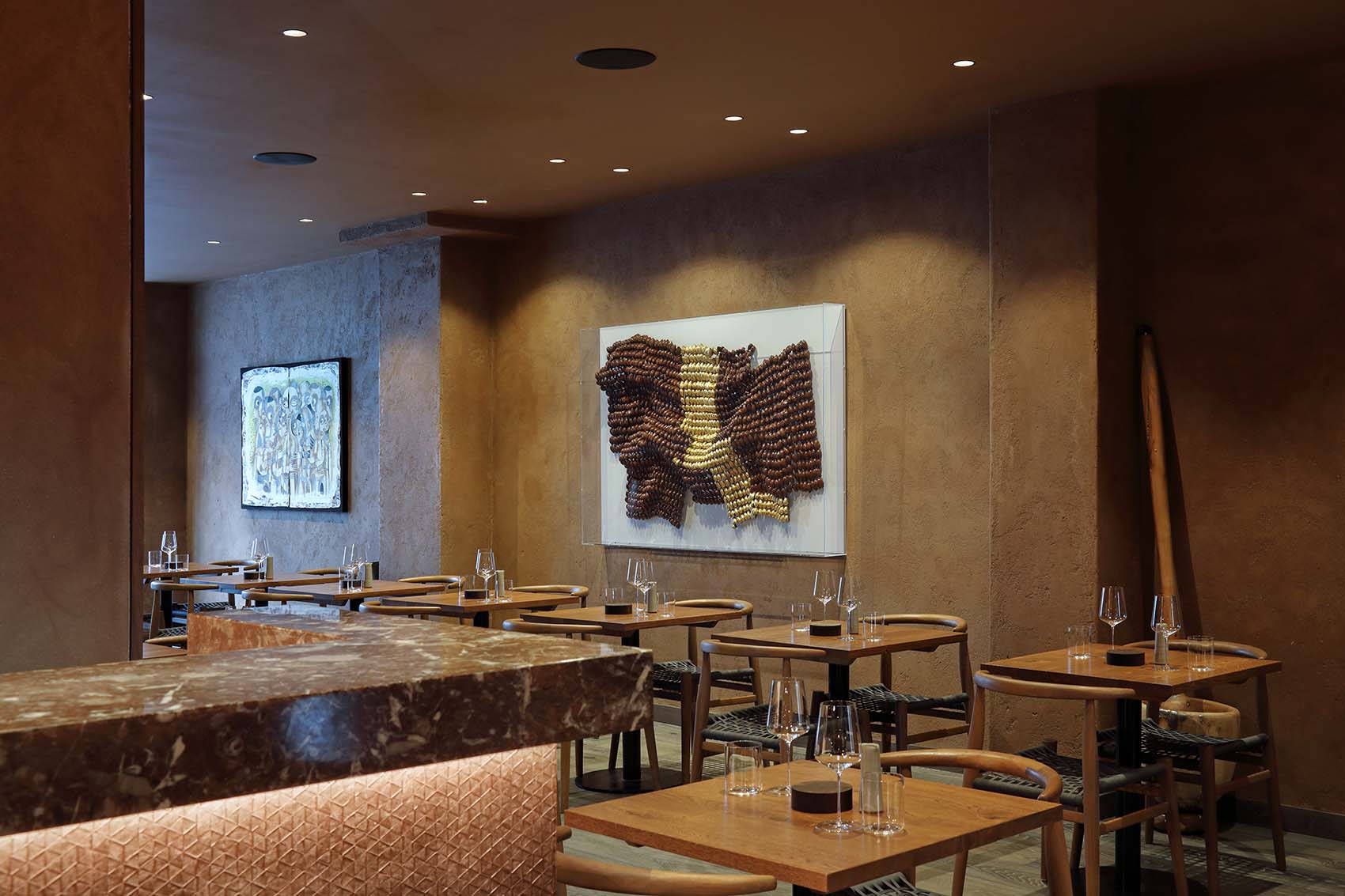