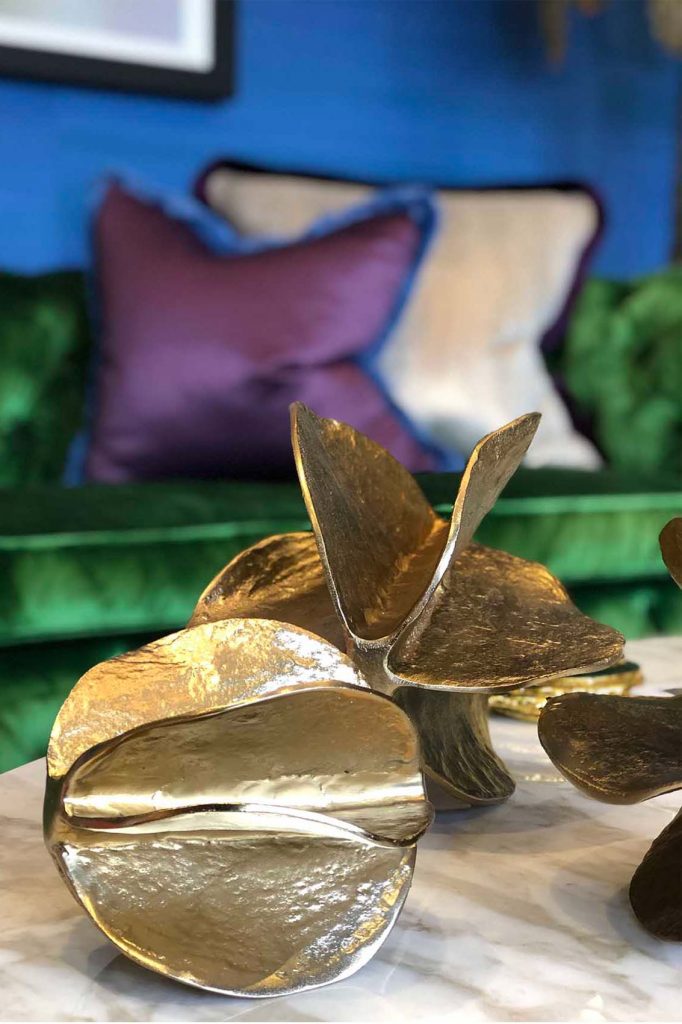 Whilst working on a High End Interior Design project nearby for a friend of the client, London Interior Designer René Dekker was offered the amazing opportunity to revitalise this nearly 14 000 square foot modern take on a Georgian farm House. For many reasons, the client had moved in before the project was completed, so had opted for a simple palette of neutrals and plains just to get the house finished in a hurry. However, she had always known that that they would one day update the decorations to fall in line with their desire for a playful and colourful yet sophisticated scheme and create an Award winning Interior Design.

The remit was to spruce up the principle rooms on the ground floor by injecting colour and pattern into each scheme and brining in a sense of Sophisticated Design. This floor included the Garden room, Family room, Media room and Entrance Hall. On the first floor we needed to bring in more Luxury Design to the master bedroom (as well as colour and pattern). We were also asked to create a brand new bedroom for the youngest member of the family (where previously it was a baby’s room) and also to re-imagine the vast landing as this was plain and unwelcoming and lacked furniture or character. On the top floor we redecorated the two guest bedrooms and created a ‘playroom/study’ for the 3 children.

As the house was for all intents and purposes completed and the project was not a total refurbishment, the René Dekker wanted to work closely with the elements that already existed within each room as this would keep the costs down (good practice even for a High End Interior Design studio like ourselves). The client had given René a book on colour which had inspired her and she hoped that this would direct the new schemes. One room in the book in particular, was the clients’ favourite, incorporating strong cobalt blue with emerald green and purple and it was this room that inspired the new scheme for the Garden room and indeed set the tone for the rest of the house to a certain degree. René Dekker Design presented a series of options for wall coverings, curtains, upholstery and cushions, narrowing this down to a palette that not only included all these astonishing colours but produced an array of fantastic and luxury finishes such as silk velvet, cotton, gold Lamé and fringing. The existing sofa was a modern deep buttoned suede model that was extremely uncomfortable. René Dekker loved the styling of the sofa so elected to re-upholster the frame in an emerald green silk velvet but to replace the deep buttoned seat with soft feather filled cushions, giving it at once both luxury and comfort. The scheme also included silk curtains in a luxurious emerald and cobalt pattern, silk cushions in purple and cobalt as well as two new bespoke swivel chairs. The room was completed with a bespoke leopard inspired, child friendly faux silk, tufted rug.

Just off the Garden room is the family room which was pretty much finished except that it lacked the magical ingredients of colour so we took inspiration from the coral coloured velvet poufs. We hung a subtle rose gold texture wall covering, re-upholstered the deep button ottoman and the foot stools in textured coral and dark blue fabrics, added scatter cushions and then installed another bespoke wool rug with a light neutral field and splashes of coral and blue in the floral motif. In the dining space we painted the existing shelving coral and then hung a fabulous coral and natural grass cloth to the back of the display unit and finally we sourced some truly inspirational art in the form of a watercolour portrait of Twiggy.

The Media room was already a monochrome space painted in purple and included a large modern purple velvet sofa and purple silk Roman blinds, but was uninspiring in its lack of finishes. A large painting of Spiderman, inspired London’s Top Interior Designer to incorporate red into the scheme to give it a lift. Textured and patterned red and purple fabrics were chosen for the scatter cushions and the studio also added curtains, which were used to, not only soften the architecture, but also the sound.

The Entrance hall was a gorgeous, but neutral, triple volume space with an imposing theatre stair case. It was made up of limestone tiles used both on the floor as well as on the stairs, cream walls and a dark bronze bannister. It was tempting to introduce some serious colour here but whatever the choice, it would have had to be used on all three floors which may have been a step to far. There was already a sumptuous colourful art work on the wall, in bright pinks, reds, purples and orange so instead we decided to take a nod from this by infusing the space with just a little hint of colour in the form of some striped cushions from Hermès. We also hung the walls in a neutral textured Armani collection wall covering giving more interest to the space by adding subtle texture and shadow. As this was the main hall, there were many doors leading off it into various other rooms, almost too many so we decided to clad the two entrance doors to the Garden room with faux books. We also added a large mirror over the fireplace, two redundant arm chairs from the original Garden room scheme and a new limestone and gold consul under the painting. Finally we added flowers on plinths to give the space a welcoming feel.

The first floor landing was simply vast but only had two green velvet chairs in the space so we persuaded the client to re-think the space completely. As a High End Interior Design studio, René Dekker Design was up for the challenge. Here we designed and installed two identical floor to ceiling display cases to show off the clients’ collection of books, photos and Objéts and were finished in a tone to match the bannister rail. We also installed a luxurious set of curtains and pelmets to match the existing chairs and brought up the original Garden room table to sit between the chairs. To complete the scheme, we ordered a handmade rug in wool and silk where the colour of the pattern took a nod from the green velvet in the chairs.

The master bedroom was again a fairly well rounded space space that only really needed a little help to give it that luxe feel. In here we used the buttercup colour in the velvet shades and the chaise as the inspiration and used this to its full glory by re-upholstering the arm chairs, adding a glamourous faux fur throw and some oversized inspirational scatter cushions and we replaced the lacklustre bedside tables with more appropriate ones to match the level of the new scheme.

The baby’s bedroom was a complete transformation from a plain characterless box with a crib and a changing table to a vision of sophisticated rose pink with shots of crab apple and lilac. At the entrance to the bedroom is the walk through wardrobe where we used a combination of Chinoiserie wall paper on the wall and faux linen on the wardrobe panels. In the main part of the bedroom, we hung a fabulous faux grass cloth that incorporated all of the desired tones, we introduced a new bespoke bed with scatter cushions and we re-upholstered the existing chair. We used the redundant table lamps from one of the guest bedrooms and purchased a glamourous new bedside table.

The top floor had three guest bedrooms, two of which we updated by adding wall coverings and accents such as cushions and throws but the third we turned into a playroom/study for the three children. Our inspiration was the Liquorice All Sorts stools we found in bright pink, yellow and blue. These colours inspired the patterned scatter cushions and the large pink arm chair. We designed and installed a large 3 seat desk complete with cable management for lap tops, a small book shelf and a floor to ceiling toy storage unit in what might have been a walk in wardrobe. The coup de resistance to this playful yet Luxury Interior Design scheme was the splash of orange which we used in the new ottoman table, scatter cushions and desk chair seat. 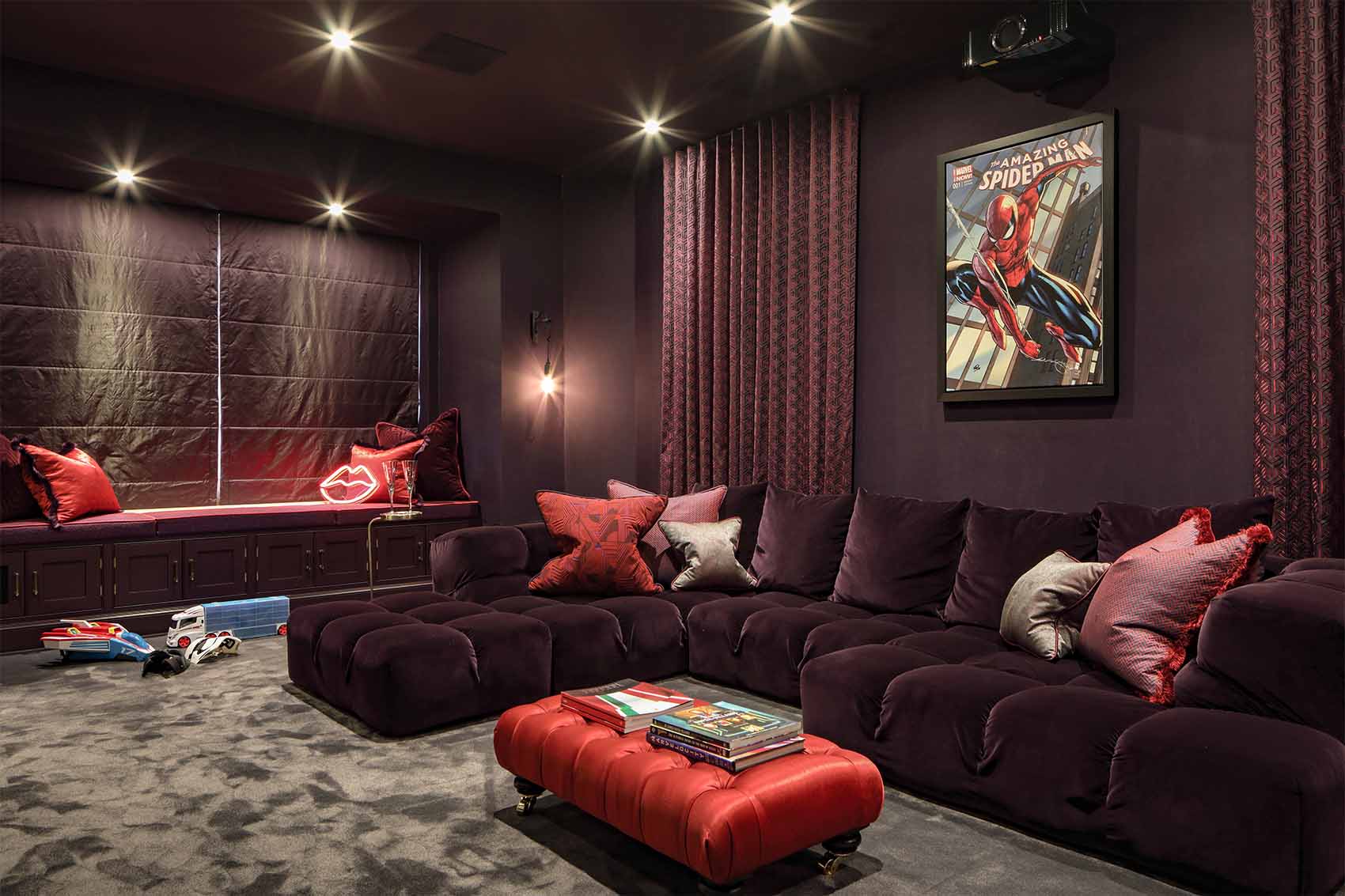 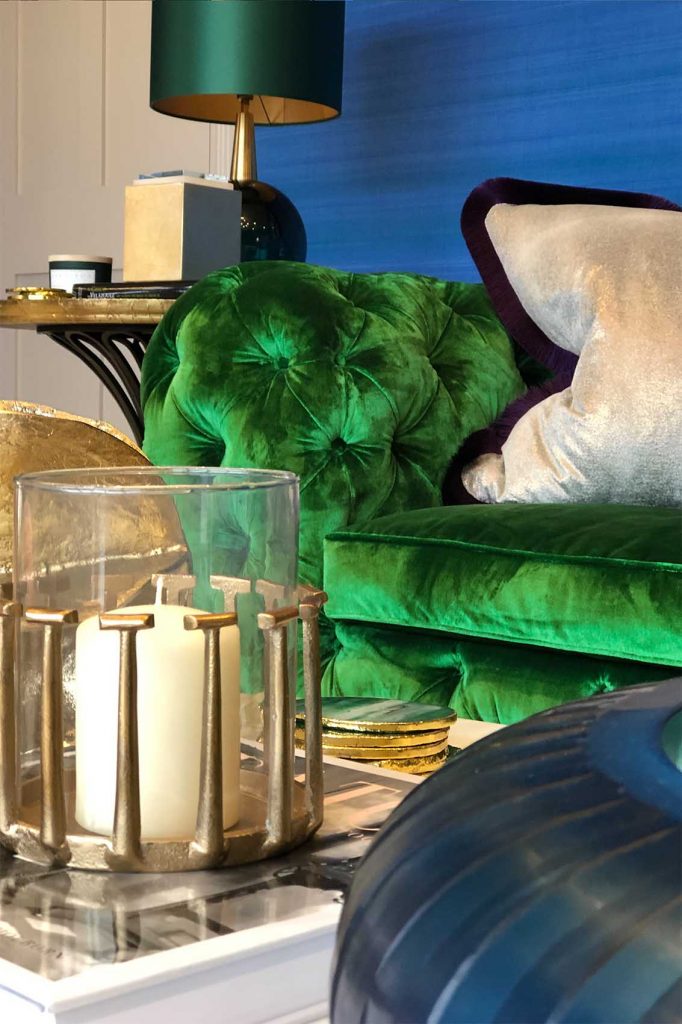 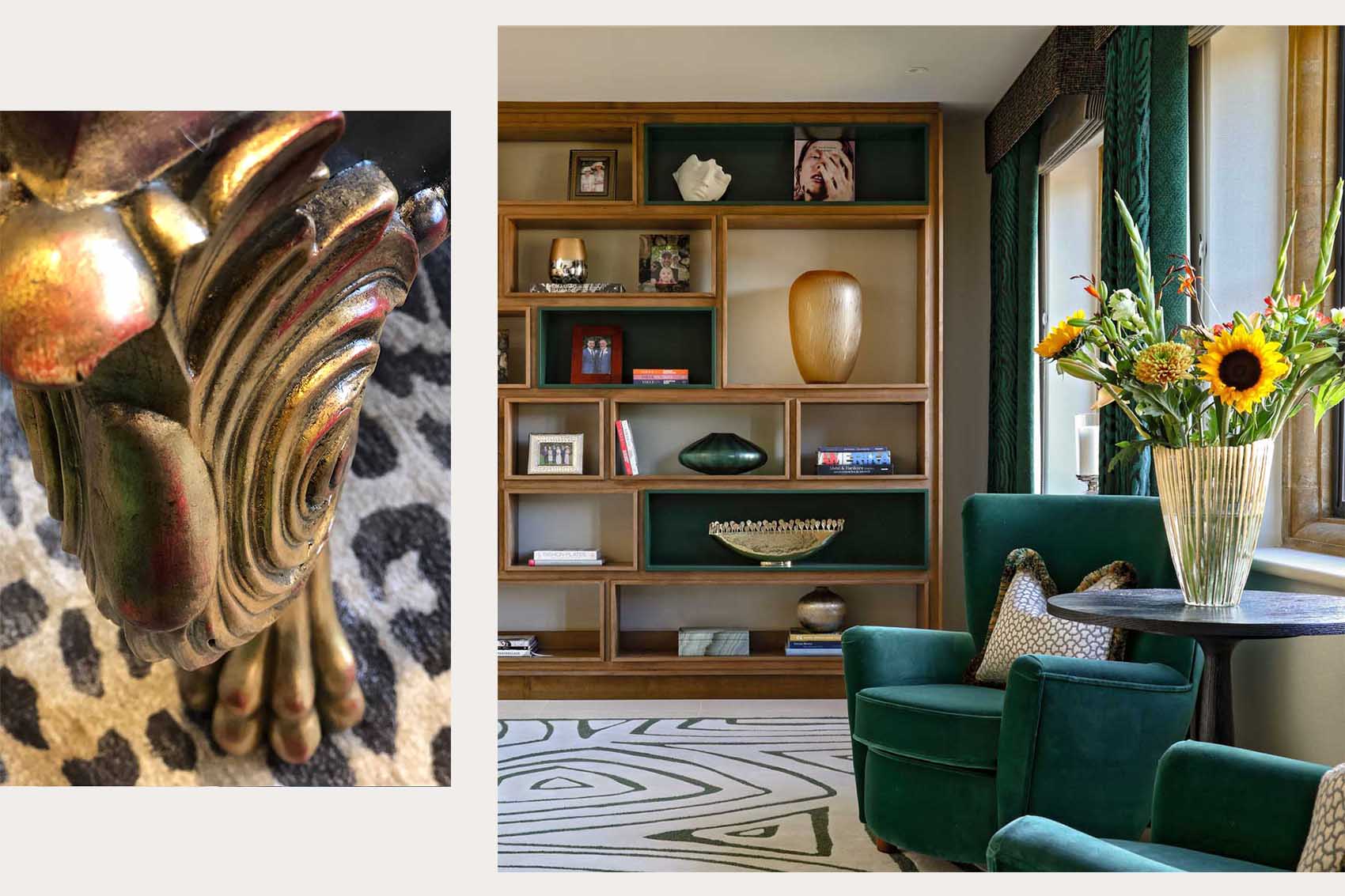 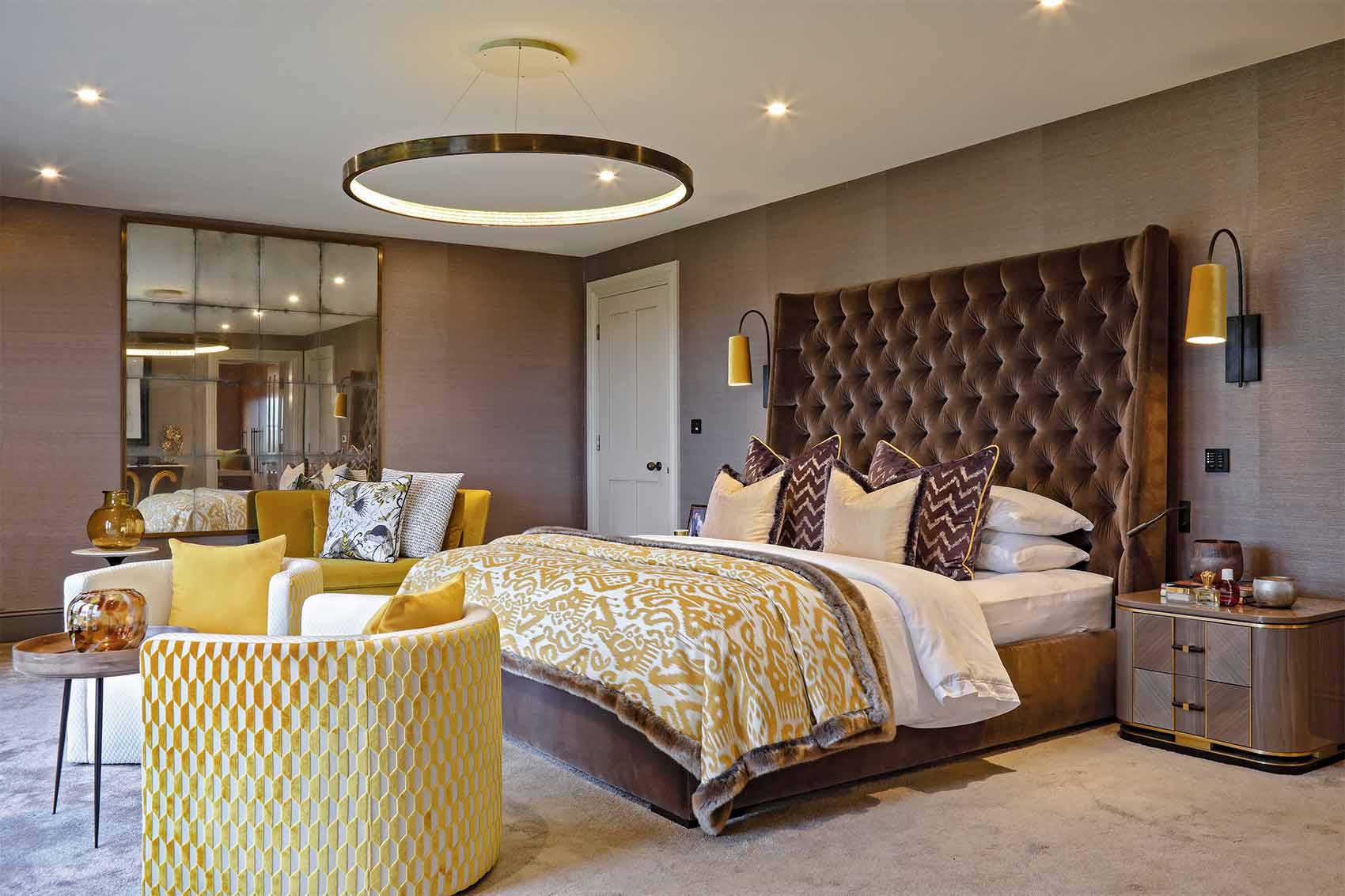 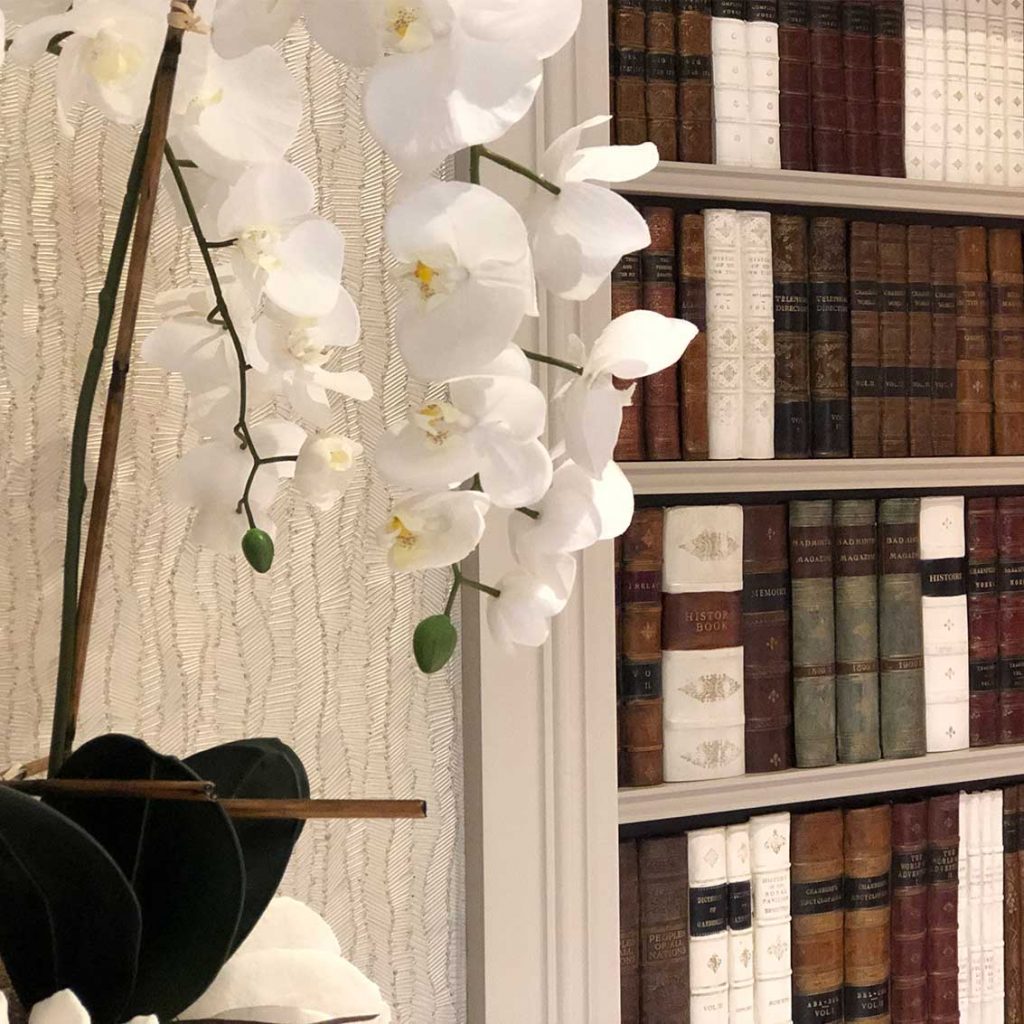 We are what we read! 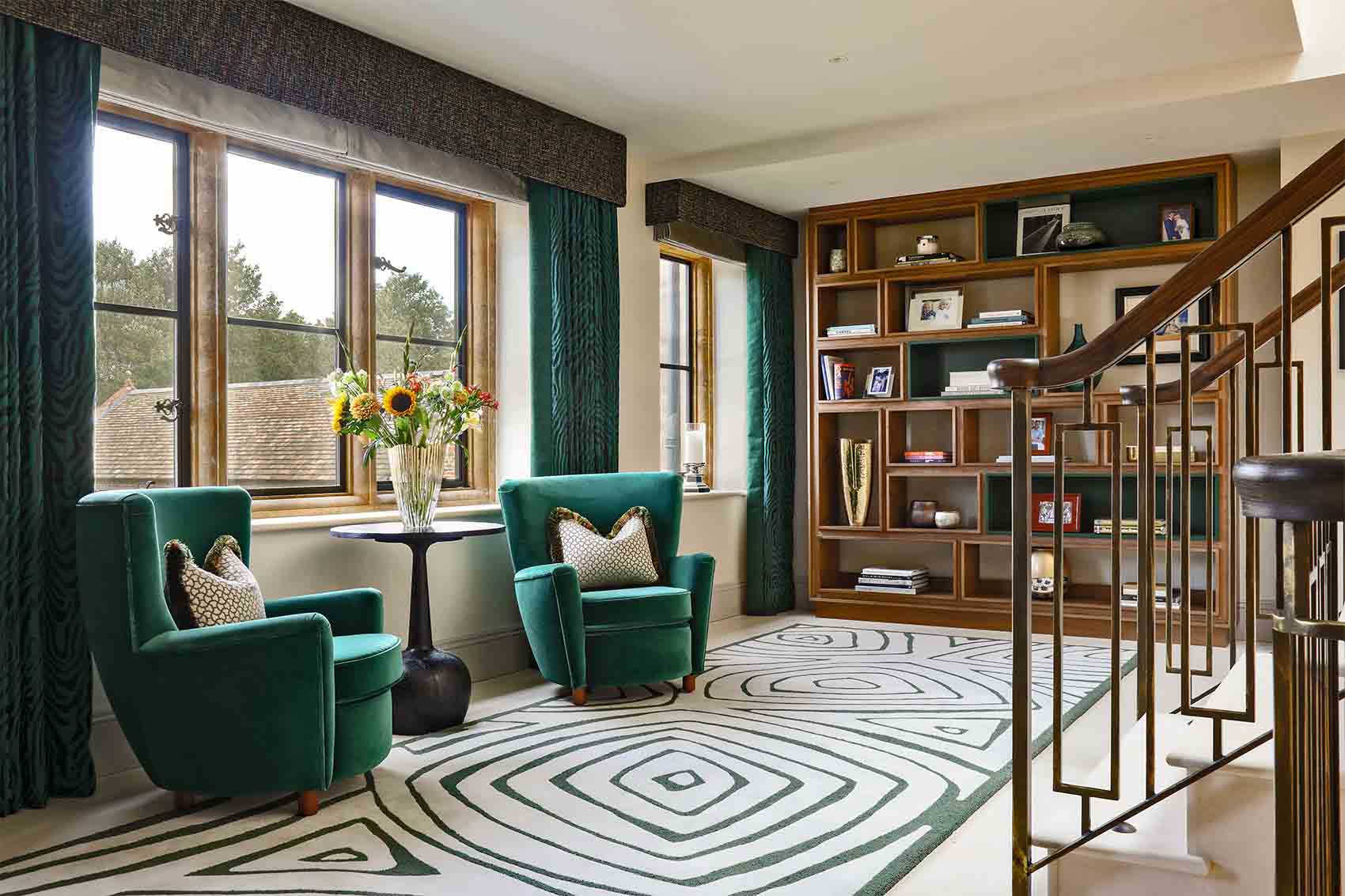